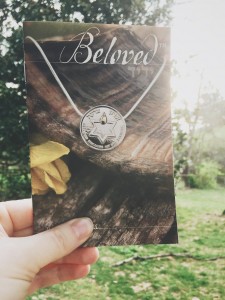 Belovedâ„¢ is a pendant designed by husband and wife, Jay and Raynna Myers. In love we have laid out the design, its symbols, and its interpretation, as we understood it should be made. It has been created with the intent to call Jews and Christians alike to remember, help and pray for Israel.

BelovedÂ is a sterling silver pendant, slightly smaller than a quarter; it is inscribed with the star of David (magen david), the top of which is uniquely completed with a gold flame (14k). The words above the star are written in Hebrew, they read Zikaron Tzedakah. These two terms form the phrase â€œRemember Righteousnessâ€ or â€œA Memorial [of] Righteousness.â€ The words below the star read: BELOVED BECAUSE OF THE FATHERS. (ROM 11.28)

The symbols and their interpretationsâ€¦

– It looks like a coin, to remind us that our physical acts of charity are thoroughly spiritual, and includes the following symbols and words:

– Gold flameÂ to represent the light that the Jewish people are called to be among, and to, the nations (Isaiah 42.6), as well as representing the continual light (ner tamid) on the Menorah that was to always burn in the Temple as commanded by God. This light served as a reminder of Godâ€™s presence among the Jewish people.

– Words above flameÂ are Hebrew, they read

ZikaronÂ (Masculine) – reminder or memorial.
TzedakahÂ (Feminine) – righteousness, charity, or saving deeds.
It is written in both Masculine and Feminine forms to express the complete Love of the Father, which is that same love that we, too, are to have. We translated it on the back of the pendant as â€œA Memorial [of] Righteousnessâ€ so you will have a reminder of what the Hebrew on the front expresses should you ever misplace this booklet.

Zikaron, comes from zakar, the word â€œrememberâ€, Biblically it conveys the idea that God is about to act with judgment and saving deeds (Exodus 2.24). Zikaron carries the idea of a reminder that we are to have, so that we will continue to do the right things (tzedakah).

TzedakahÂ â€“ â€œrighteousnessâ€ has many meanings, however there are a few that are more outstanding throughout the Scriptures. Saving deeds, in Isaiah 56.1 (also see: Ps. 98.2) Godâ€™s salvation (yeshuah) and His righteousness (tzedakah) are interchangeable. His righteousness is His salvation and visa verse.

– Words below the star are:

Beloved because of the fathers.

These words were penned by Paul they can be found in Romans 11.28, they speak of Israel and Godâ€™s continued covenant with them.

Why is it called Belovedâ„¢?

We are calling this pendantÂ Belovedâ„¢ for one main reason â€“ it expresses the heart of God, the Inspirer and Designer of this pendant.

When Jay saw the image ofÂ BelovedÂ and began laying out the symbolic design, he knew that it was going to express the heart of the Father in regards to the Jewish people and their hurting. He knew that it was to inspire love in Christians for the Jewish people as a whole; he knew that this love must pour out hope, help, and reconciliation between two fractured communities â€“ Judaism and Christianity. ThusÂ BelovedÂ must be just that â€“ a symbol of love.

Beloved, we are impressed that God wants His Church to rise up to the call of loving Israel because they are beloved by God and for no other reason.

What is the intent of Belovedâ„¢?

We must pray for her peace, lift her up with our resources, and bring aide to her downtrodden.

When the word â€œpersecutionâ€ is used, most often, it is in conjunction with Christianity, and while this isnâ€™t wrong it does limit our understanding and vision. But persecution is precisely what anti-Semitism is and itâ€™s on the rise. In many countries Jewish people are being attacked and even killed â€“ the only reason being because they are Jewish. Let us not forget the terrible suffering of the Jewish people even as we see and aide the suffering of Christians around the world.

Many Christians have forgotten that we owe the Jewish people a great debt. We are forever bound to them because of the salvation that was shared through them to us (Romans 15.27). That being said, we must not think of this as some pain filled duty, rather it is a GREAT and HOLY spiritual opportunity. To walk in the kindness that was shown to us (Romans 2.4; 11.22).

So, this pendant is a gift to all who call upon the God of Israel and with outstretched hands praise His name. Let us remember those, whom He hasnâ€™t forgotten, let us pray, let us share, and let us humbly lift them up and tend to their wounds.

Why? It is simple: because they are Beloved.

To quote the New Testament: Israel is beloved [yadid] because of the fathers. (Rom 11.28)

The Path to the Pendantâ€™s Design:

We found it in our dreams! One summer morning in the year 2000, Jay awoke with a Hebrew word on his lips as well as itâ€™s spelling:Â zikaron. He was studying Hebrew at the time, but not enough to know this word. So, he got up and searched through our concordance. It only took him one minute to find it and then thirty minutes to look at its different uses.

Several months later he awoke from a dream wherein he and Raynna were looking for a Tzedakah box* (*Tzedakah box is a charity box to put money for those in need.) In his dream, after we searched for a while he finally found it and called Raynna to come see it, then he woke up. Jay was lying awake for no longer than a minute when he heard Raynna say â€“ in her sleep â€“, â€œtzeeedaaakaaah.â€ â€“ (tzedakah). It was like her very breath was filled with this word. He woke her and asked her why she had just said that, and then she told him her dreamâ€¦

In Raynnaâ€™s dream she was walking through a park and she kept seeing these wooden boxes with a slot on the top for money, it seemed, posted on trees. She had no idea what they were but she awoke saying â€œtzedakahâ€ â€¦speaking, knowing clearly a word she had never before known, nor even then understood!
It wasnâ€™t until years later that we both learned that one can often find tzedakah boxes on trees and poles in Israel! You can understand how after such an event we have since applied ourselves to understanding and clung to these two words (Zikaron and Tzedakah), often trying to make them fit somewhere specifically in our ministry. They fit all over our hearts, ministry, and actions, but still their fullness in our lives wasâ€¦ waiting to happen.

Until one day Jay saw theÂ BelovedÂ pendant in his mind, it was then that we knew that there was a place for these two words connected in one place. We both began to seek God on every part of the design, to better understand it and make it what He wanted it to be. This is a ministry of a husband and a wife; God and His people; the masculine and the feminine.

On April 4th 2006 while walking and contemplating the magen pendant that we were developing, Jay was thinking about names. A name defines something and Biblically it gives purpose and character to the owner. So a name that God wanted was very necessary so that His heart would define it.
Should it be â€œThe Shield of Israelâ€ with reference to God? Jay knew that this was not to be its name.

What about Zikaron Tzedakah? No, because it doesnâ€™t fully relate all that is in our heart (nor what we believe was Godâ€™s intent) for this pendant. It expresses the goals and the heart, but not the deepest intent â€“ not the reason.
What about â€œFatherâ€™s Love?â€ Speaking of Godâ€™s lovingkindness. This was closer, but still not quite it.

How about â€œBeloved Fathersâ€? Speaking of Godâ€™s love for the Fathers. This was closer still.

Understood? We believe it isâ€¦

The reference was forÂ Israel, the fathers, and The Father. This expresses everything in our heart concerning this pendant. It is the unbridled passion that we felt God was intending. This was the most primitive force behind the design. It was Love!

It was Beloved-ness. Beloved in Hebrew is the word â€œYadidâ€. Why should we remember them? They are Beloved, Yadid. Why should we pray for them? Yadid, Beloved. Why should we help them? Beloved. Yadid. Why? It is simply because God calls them Yadid.
Interestingly, we did not know this at the time, but Yadid ×™×“×™×“ is in some way connected to dod ×“×•×“, which is also connected to David ×“×•×“. David means â€œBelovedâ€. The six-pointed star in the center of the Beloved coin is called theÂ magen david: The Shield of the Beloved. How He loves us!
â€œWhat is man that you are mindful of him, the son of man that you care for him? – Psalm 8:4

How great is the love the Father has lavished on us, that we should be called children of God! And that is what we are! The reason the world does not know us is that it did not know him. – I John 3:1

One final note, the firstÂ Belovedâ„¢Â created was completed on April 25th, 2006 on â€œYom HaZikaronâ€ Holocaust Remembrance Day and the first batch was received on Shavuot Celebrating the Giving of the Torah and the Spirit. We had actually planned and hoped for it to be completed far before then, but we see now, this was an act of God and it is beautiful in our sight!

It is now ten years later that we are able to offer a limited supply of The Beloved Pendant again and the mystery and wonder of God amazes us only more.

Beloved, we pray the blessings of God upon you!

Beloved is a sterling silver pendant, slightly smaller than a quarter; it is inscribed with the star of David (magen david), the top of which is uniquely completed with a gold flame (14k). The words above the star are written in Hebrew, they read Zikaron Tzedakah. These two terms form the phrase â€œRemember Righteousnessâ€ or â€œA Memorial [of] Righteousness.â€ The words below the star read: BELOVED BECAUSE OF THE FATHERS. (ROM 11.28) Read more about this pendant by clicking HERE.

Please note,Â the silver chain pictured above is no longer available. The Beloved Pendant comes on a black cord, suitable for wear by bothÂ men and women, or can be exchanged with your own chain of preference.

Thank you for your interest and support!
Only $25 plus shipping, while they last.